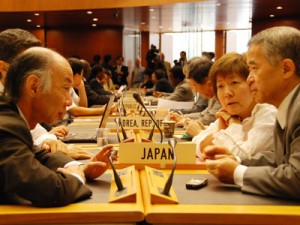 The National Intelligence Council (NIC) describes globalization as a “growing interconnectedness reflected in the expanded flows of information, technology, capital, goods, services and people throughout the world” (“2020 Project”). One way this growing interconnectedness has manifests itself is in the sheer size of the world economy and the number of new economic powerhouses rising to prominent places on the global stage. The NIC states, “The world economy is projected to be about 80 percent larger in 2020 than it was in 2000, and average per capita income to be about 50 percent higher” (“2020 Project”).

In addition to immense increases in trade, other forces are at work. Patrick Mendis attributes the impetus behind globalization to be the “Information Revolution,” the “spread of democratic values,” and “liberal economic and trade polices advocated by the World Trade Organization (WTO) (3-4). These trends continue to this day and help shape the international monetary system and trading regimes.  On an international level, according to Spero and Hart, we see more multinational corporations and internationalization of production (20), an increase in the Eurocurrency market (21), a “more equal distribution of economic power” (23), more “intra-industry trade” (80), shifts in manufacturing and competitiveness (81), and strong “disruptions in the international system” (83) that easily spread in a global fashion.

The benefits of globalization are often distributed unequally between developed and undeveloped countries. Moreover, countries that liberalized capital markets too quickly, as prescribed by the IMF and the U.S. Treasury, have often incurred financial crises. Today the developing countries, led by China, sometimes seek a new way of doing business that differs from the main rulemaking bodies led by Western countries and systems.

While U.S. leadership helped launch the international monetary system and manage it effectively, but “by the end of 1959, European and Japanese reserves equaled those of the United States” (Spero and Hart 17).  With the era of stagflation in the 1970’s and 1980’s, the ability of the U.S. to lead on trade issues was further eroded and the European Union (EU) and Japan rose to positions of economic prominence. In the 1990’s and into the 21st century, the WTO has grown and newly industrialized countries have more clout in global economic affairs (Spero and Hart 108-113).  In the future, “Asian giants may use the power of their markets to set industry standards” and make key “interest rate decisions” (National Intelligence Council 2009).

Today, Abdelal and Segal point out that “U.S. policymakers tend to be skeptical of global rules and international organizations” (“Double Vision” section, par. 2), while European policymakers favor them. With a lagging economy, the U.S. has backed off its leadership role and nobody has stepped up to fill it. The Doha Round has stalled in part because of weak, fragmented leadership (Spero and Hart 114). Mattoo and Subramanian point out that “overall trade has flourished, but the multilateral process that governs it has languished” (“Stalled Conversation” section, par. 1).

Security issues, power politics and a desire to preserve national sovereignty add another layer of complexity that buffers any rush to cede power to a world entity like the International Monetary Fund (IMF) or WTO.  Nevertheless, according to its proponents, trade liberalization produces a number of specific benefits to include increased competition in domestic markets, lowers prices, increases consumer choice, and encourages specialization and comparative advantage.

Protectionist measures like the EU’s Common Agricultural Policy (CAP) as well as nontariff barriers like customs procedures have emerged to counter efforts at liberalizing global trade. At the heart of the protectionist mindset is the desire to insulate domestic industries and national economies from undue harm and reward them financially and politically. Developing countries may benefit more by focusing the emphasis on the development of its human capital, economic infrastructure and efficient national market institutions than the singular pursuit of integration into world markets.

Free trade advocates would argue that protectionism doesn’t work for long-term growth.  Arvind Panagariya says developing nations must increase global trade to grow faster (20), reduce poverty (22), access richer markets through exports (23), and better protect the environment (28).  Not all economists agree. Dani Rodrik points out that “countries that have benefited the most from globalization are those that did not play by the rules,” citing China, Vietnam, India and Uganda as examples of countries using strategic protectionism (5).

The Economist notes that “global integration may be causing wage stagnation, widening inequality and greater insecurity” (“Leadership” section, para. 3) for the American middle class. Thus, protectionism may have its place at least on a limited scale. The historical record is one where the most advanced industrial states did not develop on the basis of the policies and the institutions that they now recommend to the developing countries, and this includes the United States.

Various multilateral trade negotiations such as the Geneva Round, Tokyo Round and Uruguay Round helped to further liberalize trade while the emergence of the EU and Japan. But are multilateral agreements really necessary to foster increased global trade? Abdelal and Segal declare that the number of bilateral agreements has doubled in the past ten years (“Doha Decline” section, para. 2).  Moises Naim adds that “between 1983 and 2003, 66 percent of tariff reductions in the world took place because governments decided it was in their own interests … 25 percent (occurred) as a result of agreements reached in multilateral trade negotiations (2007: 95).  Bilateral agreements like the North American Free Trade Agreement (NAFTA) between the U.S., Canada and Mexico may be more easily obtained because fewer parties are involved in the negotiations.

Consumer services, electronic commerce and intellectual property such as copyrights and patents now make up a substantial portion of trade, or about “65 percent of U.S. GDP and 50 percent of the GNP in twelve other developed countries” as of 1999 according to Spero and Hart (98-99). The combination of technology growth and cheap labor in developing countries will enable services trade to continue to expand in years to come. Due to the technological gap between developed and less developed states (LDC), LDC’s can make large productivity gains both on a relative and absolute scale by borrowing technology from technological leaders.

Regulation of these new forms of trade is another emerging issue. Dani Rodrik says that not only should technology and intellectual property be regulated through international trade policy, but also “labor standards,” “environmental, health and safety standards,” and other unfair trade practices that favor foreign firms on domestic soil (20). While the Tokyo and Uruguay Rounds made considerable progress on tariff reductions and some nontariff barriers (Spero and Hart 107-110), much more progress can be made in nontariff barriers such as quotas, safeguards,  agricultural policies, and voluntary restraint agreements.

Dani Rodrik has said it best: “Market incentives, macroeconomic stability, and sound institutions are key to economic development. But these requirements can be generated in a number of different ways -by making the best use of existing capabilities within the context of specific constraints. There is no single model of a successful transition to a high growth path. Each country has to figure out its own investment strategy” (2001).

Barker and Mander explain that subsidy payments in developed countries like the U.S. unfairly benefit large corporations at the expense of smaller farmers, and may threaten food security by encouraging the growing of “monocrops” for export rather than diverse crops that can fed the local population (253).  Agriculture is a huge sticking point and continues to divide the North and South in multilateral negotiations like Doha (Spero and Hart 114).

Moises Naim reports that “as many as 32 million people could be lifted out of poverty if the Doha Round were successful” (95). The Economist isn’t quite as optimistic, countering that “economic stakes in the Doha round are modest … little more than 0.1% of global GDP” (“Freer Trade” section, para. 3). Barker and Mander point out that social inequalities may also result from opening up global trade too quickly. “In almost all developing countries that have undertaken rapid trade liberalization, wage inequality has increased” (252).  Abdelal and Segal state that “the richest 10 percent of households in China now account for more than 40 percent of the country’s wealth, whereas the poorest 10 percent … account for only about 2 percent” (2007).

Thus, one of the paradoxes of the benefits of global trade is the widening gap between the rich and poor. But, since globalization promotes trade and investment flows, it contributes significantly to economic growth and thereby to lifting people out of poverty.  The issue is not one of increasing inequality, but of enhancing the development prospects of states in the South and economic and environmental sustainability.

Jeffrey Frieden explains that “support for economic integration is slipping” (20). His opinion that “deteriorating income distribution, macroeconomic imbalances and concerns about national security” in the U.S. that affect America’s support for multilateral economic coordination has merit and a reciprocal effect on other major players like the EU, Japan and even China.  As global conditions deteriorate, major players may pull back to tend to domestic issues. That said, MNCs will continue to play a major role in the international economy challenging the traditional role of the state. Future compromises will have to be made in agriculture, financial markets oversight, and nontariff barriers in order for more effective multilateral agreements to be obtained. Otherwise, we are looking at a continued trend of more bilateral agreements and protectionism.