Were the rulings of the International Military Tribunal (IMT) more dependent upon customary or statutory international law?

Customary international law (IL) derives from a “combination of ‘state practice’ and opinio juris, the belief that a certain type of conduct under IL is an obligation (Byers 4).  According to Byers, new rules require “widespread support” before they become part of customary IL (4). Cerone adds that the Martens Clause of the Hague Conventions binds 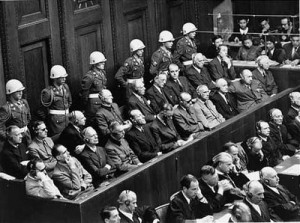 “belligerents to remain under the protection and the rule of the principles of the law of nations” until such time as custom becomes statutory in some form or fashion (qtd. in Mertus & Helsing 219-220). Thus, custom serves as a “gap-filling” measure that universally binds all states and may apply to scenarios where IL has not yet been formalized into statutes (Mertus & Helsing 220).

In contrast, statutory IL is typically found in treaties, charters or conventions in the form of written instruments that bind two or more countries in a contractual way to its stated obligations and purposes (Byers 4). Treaties may trump conflicting customs, codify customs into rules, and/or create new customs as a result of its ratification (Byers 6).

The question then becomes, to what extent did customary IL or statutory IL exist at the time of the IMT which established individual responsibility for Crimes Against Peace, War Crimes and Crimes Against Humanity? Customary IL regarding jus ad bellum, or the decisions made to go to war or not, descended from Hugo Grotius and the ‘Just War’ theory of Aquinas among others (Steiner, Alston & Goodman (SAG) 117). Jus in bello, or international humanitarian law, descended more recently from The Hague Convention of 1907, the military rules outlined in the Lieber Code of 1863, and the 1925 Geneva Protocol (SAG 119). Moreover, the Kellogg-Briand Pact of 1927, of which The London Agreement leaned upon to establish the IMT and its Charter, renounced wars of aggression as instruments of foreign policy (1928).

Critics of the IMT point out that the principle of ‘nullum crimen sine lege, nulla poena sine lege’, or no punishment without pre-existing law, was violated through ex post facto punishment of individuals for crimes against peace, war crimes, and crimes against humanity. Moreover, these conventions were between states not individuals, and not all of whom were parties to the conventions during WWII (SAG 119, 123).

The Kellogg-Briand Act has been violated by several nations since 1928 and did not define the crime of aggression. The conventions also did not specify that individual criminal responsibility would result from non-compliance, nor did it specify remedies. Other critics point out that the IMT lacked constitutional authority, was a political rather than a legal process, did not punish Allied Powers for their own crimes, and allowed the victors to administer justice rather than an impartial third party. Additionally, statutory law that did target and specify individual responsibility and criteria that constitutes regular breaches and grave breaches of humanitarian IL in the form of the Geneva Conventions did not come into being until after the IMT concluded.

Defenders of the IMT point out that it is the “expression of international law existing at the time of its creation” and ties the collective illegality of the war to the individual illegality of criminal actions committed during the war by virtue of the principle that the crimes were of such an inhumane and horrific nature that they constitute violations of jus cogens peremptory norms of IL (SAG 77). Proponents note, “Crimes against international law are committed by men, not abstract entities,” and these men must therefore be held accountable (SAG 120). The violation of such norms that “exist by force of natural reason or social necessity” may “shock [] the conscience of mankind and be contrary to elementary considerations of humanity” (SAG 83).

Inconsistent adherence to custom and violations of Kellogg-Briand aside, the IMT Charter claims that “by 1939 these rules laid down in the [Hague] Convention were recognized by all civilized nations, and were regarded as being declatory of the laws and customs of war” (SAG 123). Except perhaps by members of the Allied and Axis powers? Kelsen notes that the IMT reflected “violations of existing international law” and that charges of ex post facto retroactivity “can hardly be considered as absolutely incompatible with justice” (qtd. in SAG 127).

The rulings of the IMT were therefore dependent on both customary IL and statutory IL as interpreted by the Allied Powers. Both were cited as justification for the tribunal within the text of the Charter. Customary IL in regards to jus ad bellum was hardly conclusive or followed consistently at the time. Statutory IL in regards to jus in bello primarily applied to states and did not include all war participants as parties to the convention.  The IMT was probably more dependent upon statutory IL as evidenced by its numerous citations of The Hague Convention and Geneva Convention. The IMTs reliance upon either at the time is definitely shaky at best.

Since that time, however, many of the principles of the IMT have been embodied in further treaties and conventions such as the UN Charter, the Geneva Conventions, and the International Criminal Court. The IMT helped avoid impunity for the perpetrators of the most serious crimes of international concern during WWII. It wasn’t perfect. It didn’t follow all the right protocols. I think many of its critics make some very good points that it could have been done better. There were 19 of 22 guilty verdicts, so it got results. I think it was appropriate for the IMT to depend on both customary IL and statutory IL given the time in history in which this occurred. Its dependence on both, though imperfect, furthered the development of both bodies of IL in crucial ways that make it more feasible to hold perpetrators of serious crimes accountable.