Blind Man’s Bluff: Kazakhstan’s Mirage of Compliance with International Obligations to Uphold the Freedom of Expression and Freedom of Assembly and Association

“Blind Man’s Bluff: Kazakhstan’s Mirage of Compliance with International Obligations to Uphold the Freedom of Expression and Freedom of Assembly and Association” by Kapok Tree Diplomacy

Section One – The Right to Freedom of Expression

ICCPR Principles and Obligations. The Universal Declaration of Human Rights (UDHR), though not legally binding, declares that “Everyone has the right to freedom of opinion and expression … and to seek, receive and impart information and ideas through any media and regardless of frontiers” (Art. 19).The ICCPR, which Kazakhstan ratified in 2006 (UN Treaty Collection), expands upon this definition and binds state parties “in accordance with its terms and with international law” (Steiner, Alston and Goodman (SAG) 152). Treaty obligations are to be governed by the Vienna Convention’s Article 26 fundamental principle of pacta sunt servanda which states, “[e]very treaty in force is binding upon the parties to it and must be performed by them in good faith” (Dunoff, Ratner & Wippman (DRW) 58). Article 19 of the ICCPR declares:        END_OF_DOCUMENT_TOKEN_TO_BE_REPLACED

The Interconnectedness of Military, Political and Economic Tools in Conflict Resolution and Post-Conflict Reconstruction

For the last twenty years following the end of the Cold War, the nature of conflict has transitioned from mostly interstate conflicts to predominantly intrastate conflicts characterized by a “complex web of social, economic, cultural, political and religious factors” (Bercovitch & Jackson 3). As the context underlying conflict has changed, the approaches to conflict resolution (CR) and post-conflict reconstruction (PCR) have adapted as well. Policy-makers have a variety of military, political and economic tools at their disposal to contend with the security, welfare and political representation issues resulting from fragile and failed states.

This essay will analyze the policy tools available for CR and PCR, and, in doing so, answer the following questions:

(1)   To what extent are the political, economic and military tools available to policymakers for use in conflict resolution and post-conflict reconstruction interconnected?

(2)  Has the application of such tools become considerably more challenging since the end of the Cold War? If so, how and why? If not, why not?

Section One of the essay will provide a brief summary of how the environment of conflict has changed since the end of the Cold War. Section Two will analyze the military tools. Section Three will cover the political tools, and Section Four will address the economic tools. Section Five will include a brief summary of how these tools are interconnected, but the assertion that they are interconnected will be made in each section of the essay.

Likewise, the question of whether the application of these tools has become considerably more challenging since the end of the Cold War may be answered in the affirmative with the how and why addressed throughout each section of the paper. Section Six will conclude the paper with a brief summary of the essay.

END_OF_DOCUMENT_TOKEN_TO_BE_REPLACED 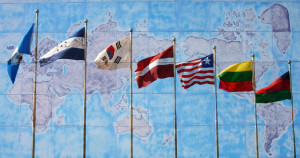 Nuclear weapons are able to do far more than disable enemy combatants. They can destroy entire cities and obliterate entire human populations with one powerful blast.  The international community has developed two important treaties, The Treaty on the Non-Proliferation of Nuclear Weapons (NPT) and the Comprehensive Test Ban Treaty (CTBT), to limit proliferation of Weapons of Mass Destruction (WMD), encourage disarmament, and preserve peaceful usage of nuclear energy (Dunoff et. al. 532-533).  Although these treaties have substantial ratifications, their effectiveness is severely limited by holdouts and compliance issues.   END_OF_DOCUMENT_TOKEN_TO_BE_REPLACED