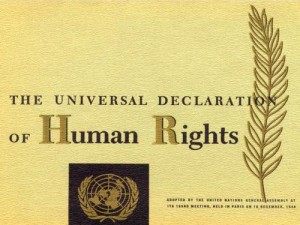 Following approval of the UDHR, the UN Commission, General Assembly and Third Committee began work on a more “detailed and comprehensive” expression of human rights that emerged in the form of “two principal treaties – The International Covenant on Civil and Political Rights (ICCPR) and the International Covenant on Economic, Social and Cultural Rights (ICESCR)” which were both approved in 1966 and both entered into force in 1976 through the required number of ratifications (SAG 136). The ICCPR and ICESCR were designed to be more legally binding than the UDHR. Collectively, these three documents are often referred to as the ‘International Bill of Human Rights’ (SAG 133).  END_OF_DOCUMENT_TOKEN_TO_BE_REPLACED

In answering this question, I must first appeal to the American Law Institute’s “Restatement of the Law, Third, Foreign Relations Law of the United States.” In Section 101 it defines international law as follows: “international law consists of rules and principles of general application dealing with the conduct of states and of international organizations and with their relations inter se, as well as with some of their relations with persons, whether natural or juridical.”

Thus, to answer the question of whether international law is law, one must look at its rules and principles inherent in its definition, its sources, and its evidence to make a determination as to its strength, validity, coherence and legitimacy. I would submit that the whole point of law is to bring about justice as a vehicle for truth and liberty. Does international law result in justice? Do its sources and evidences comport with truth and equality? END_OF_DOCUMENT_TOKEN_TO_BE_REPLACED

The Efficacy of the Modern Institution of International Law 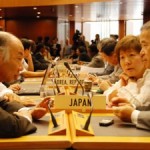 Section One – A Brief History and Definition of International Law

History.  The modern institution of international law has its historical roots in the sixteenth and seventeenth centuries with the evolution of the nation state in Europe.  Werner Levi notes, “The feudalistic entities with their relatively uncertain borders gave way to states based upon sharply defined territory” (qtd. in Dunoff, Ratner, & Wippman 5).  As states emerged, the need to communicate and coordinate according to definitive norms and principles also emerged as well as the need to delineate authoritative boundaries and interpret binding obligations.

The authority to rule over these sovereign territories was originally understood as a “divine right” proceeding from God or natural law, “a set of divinely ordained principles of state conduct, accessible to all endowed with right reason” (Reus-Smit 282).  Through influential philosophers like Hugo Grotius and Alberico Gentili, the concept of “positive law,” created by humans and practiced by states, began to take its place alongside and even supplant natural law as the primary basis for international law (Dunoff, Ratner, & Wippman 6). END_OF_DOCUMENT_TOKEN_TO_BE_REPLACED